Home > News > The heat will be on tomorrow out east in... 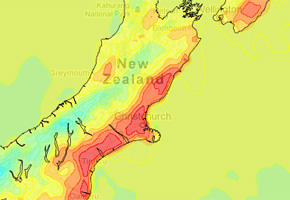 Tomorrow a northwesterly airflow builds over the country ahead of a front which moves across New Zealand on Thursday.

From Otago up through to Marlborough this will be felt the most as the mercury is likely to hit into the high 20’s or even early 30’s for some.

The east coast of the North Island will be quite warm also however the northwest airflow won’t be able to make it through to ground level just yet meaning northeasterlies along the coast will keep temperatures in the mid to high 20’s. Still nothing to cringe at and it will still be a great day.

But as soon as the weather giveth it taketh away, temperatures will only get in the mid to high teens on Thursday for the east of the South Island as the front mentioned above will bring mostly cloudy skies and cooler southerly winds.

As for the rest of us on Wednesday  the North Island is looking very similar for the most part to how it has been today so that’s good news, northwesterlies will pick up in the afternoon about the Wellington area. On the West Coast of the South Island cloudy skies and the odd shower is on the cards, a southwest change develops about Southland and Otago late afternoon bringing showers.