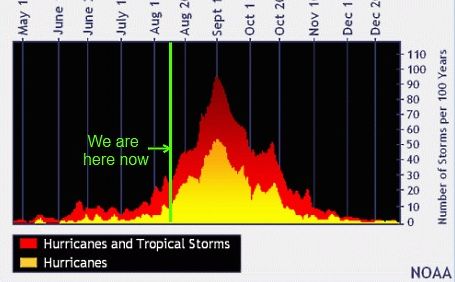 As the Atlantic hurricane season prepares to suddenly ramp up Senior Meteorologist Stu Ostro (from our friends at Weather.com) writes this piece on the deadliest and most expensive hurricanes to hit America.

The document titled “The Deadliest, Costliest, and Most Intense United States Tropical Cyclones” is *the* official go-to source for those statistics and related information.

The report has periodically been updated, and the latest, by Eric Blake and Chris Landsea of the National Hurricane Center (NHC) and Ethan Gibney of the National Climatic Data Center (NCDC), has just been posted.
My weather.com colleague Jon Erdman and I have compiled some highlights of new information and changes that are in this update.
Most notably, the estimate of direct damage produced by Hurricane Katrina is now $108 billion. As if the previous estimate of $81B wasn’t stunning enough! That makes Katrina the first hundred billion dollar hurricane.
And that’s just for direct damage, i.e. it does not include the untold indirect economic losses (or, of course, the emotional suffering of survivors and the staggering number of people who lost their lives, notwithstanding the fatality estimate having been revised downward in this update).

Here are a few key excerpts from the report’s analysis (my bold):
The study by Jarrell et al. (1992) used 1990 census data to show that 85% of U.S. coastal residents from Texas to Maine had never experienced a direct hit by a major hurricane. This risk is higher today as an estimated 50 million residents have moved to coastal sections during the past twenty-five years.
The experience gained through the landfall of 7 major hurricanes during the past 7 years has not lessened an ever-growing concern brought by the continued increase in coastal populations.
Continued coastal growth and inflation will almost certainly result in every future major [Category 3+] landfalling hurricane (and even [some] weaker hurricanes and tropical storms) replacing one of the current costliest hurricanes. For example, all three of the U.S. hurricane landfalls of 2008 made the top 30 list, despite none of them being major hurricanes at landfall. [Stu’s note: That includes not only Ike and Gustav, but even also Dolly.]
If warnings are heeded and preparedness plans developed, the death toll can be minimized. However, large property losses are inevitable in the absence of a significant change of attitude, policy, or laws governing building practices (codes and location) near the ocean.
And:

Katrina provided a grim reminder of what can happen in a hurricane landfall.

Sociologists estimate, however, that people only remember the worst effects of a hurricane for about seven years (B. Morrow, personal communication).
One of the greatest concerns of the National Weather Service’s (NWS) hurricane preparedness officials is that people will think that no more large loss of life will occur in a hurricane because of our advanced technology and improved hurricane forecasts.
Bill Read, current Director of NHC, as well as former NHC Directors, have repeatedly emphasized the great danger of a catastrophic loss of life in a future hurricane if proper preparedness plans for vulnerable areas are not formulated, maintained and executed.
And now we head into the heart of the 2011 Atlantic/Caribbean/Gulf season.
Although the official hurricane season as a whole extends from just after Memorial Day till after Thanksgiving, on average there’s a very pronounced peak from mid-August through September and into October. I
t never ceases to fascinate me how, right on cue, in most years things really ramp up between now (August 10) and Labor Day. (Five named storms have already formed this season, but they’ve been fairly small and weak, none became a hurricane, and at least one probably wouldn’t have even been designated as a tropical storm in the pre-satellite era.)

All years are not equally productive. What about the peak of this season? Well, in late July I posted this (below) on my Facebook TWC fan page. Hopefully I’ll have to post something a couple months from now saying how wrong that assessment was!
But as I also alluded to, a critical factor in the outcome of a season no matter how many storms develop or how strong they become is exactly where they go.
The pattern is sending mixed messages as to what the predominant steering flow will be as we head through the peak of this season. At times it’s evoking 2004 (Caribbean/Florida/Gulf). Alternatively it has hinted at a repeat of 2010 (missing U.S. to east and south). There has been talk about resemblance to the mid-1950s (East Coast).
Regardless, remember that all it takes is one to bring disaster, like Andrew in 1992 and Allison in 2001 did, in otherwise relatively uneventful seasons. Both are in that Top 10 costliest list.
Let’s hope for the best this year, yet be prepared just in case.