The birth of Jova 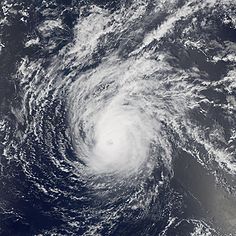 Forecasters say Jova has become a hurricane out in the Pacific Ocean.

The US National Hurricane Center in Miami said that Jova had maximum sustained winds near 121 kph but was still far from land. It was moving east-northeast at 5 kph and was about 708 kilometres west-southwest of Manzanillo, Mexico.

No coastal watches or warnings had been issued, but current forecast models show Jova it could make landfall over Mexico by tomorrow or Wednesday.

Meanwhile, Irwin has weakened to a tropical storm in the eastern Pacific, about 1,497 kms southwest of the southern tip of Baja, California. It was expected to start moving toward land in the coming days. Irwin had maximum sustained winds of about 113 kph.

In the Atlantic, Tropical Storm Philippe continued to weaken far from land.