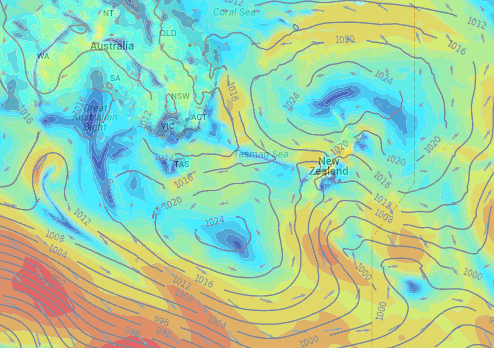 A front currently sitting over the North Island is being squeezed between two anticyclones, one to the north and one to the south – which is weakening it.
It will result in some early shower activity in both islands, but most of that should blow away by the afternoon.

Southland and Central Otago can expect mostly sunny weather with just some easterly quarter winds which will clear any early clouds away.
Northeast winds will pick up a bit more towards the afternoon.

Further up in Canterbury, early showers will give way to sunny spells towards late morning, as southerly winds pick up and turn northeast in the afternoon.
Marlborough will also see morning showers turn into a largely sunny day, with the prevailing winds turning to the east after lunch.
Nelson will follow much the same pattern, though showers may last a little longer in the morning, and the winds will turn northerly in the afternoon.

Early showers about Wellington and Wairarapa will clear, resulting in a pleasant day, though tempered by southerly winds – which will ease towards evening.

Showers will stick around longer in Hawke’s Bay and Gisborne, before clearing in the afternoon – then cloud will break, so temperatures will stay on the cool side for these regions.
Southerlies will ease late in the day for the lower and eastern North Island too.

The west of the island is looking cloudy with rain early doors, though it will ease to showers and clear for most places south of Whanganui by midday.
For Taranaki and the Central North Island, showers will stick around a bit longer – looking like clearing early afternoon as cloud breaks and sunny areas develop and westerly winds will tend southerly later on.

The Waikato is looking at a similar pattern, starting with fairly cloudy skies and a few showers from mid to late morning, then clearing mid afternoon.
Westerly winds will tend southerly later in the evening, with any cloud clearing away.

The Bay Of Plenty sees morning cloud break to afternoon sunny areas too, and winds mostly from the west.

About East Cape some low level convergence may set off a few showers late afternoon then clearing in the evening.

Auckland has cloudy periods, chance of a shower about in the morning and afternoon (mainly out west) -otherwise fairly dry, with prevailing westerlies.

And Northland has sunny areas and periods of cloud with west to southwest winds, due to an anticyclone to the north bringing higher pressure, and keeping that front further south.