The Big Picture on Friday 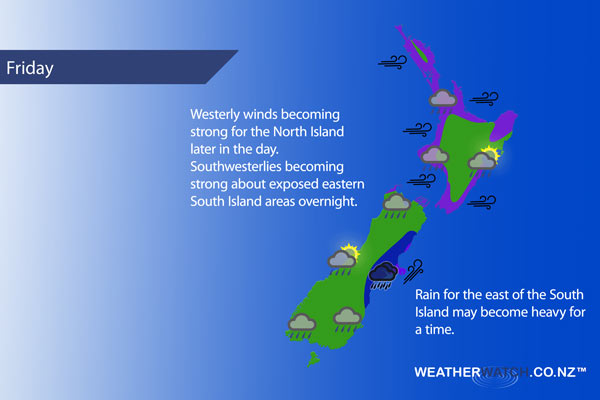 Friday sees a low move onto New Zealand coming in from the Tasman Sea. This will bring strong westerly winds later in the day for the North Island and southerly quarter winds over the South Island with rain, especially in the east.

For most western regions of the North Island we can expect mostly cloudy skies and showers here and there, northwesterly winds strengthen from the west later in the day with gales possible about the coast. The east coast sees showers clear to some afternoon sun, westerlies strengthen later in the day / overnight.

The South Island sees shower activity for most regions, on the east coast this rain is fairly widespread. It may become heavy for a time afternoon / evening but the main reason we have noted the rain in the east is due to the dry conditions that are in parts of Canterbury.

Strong W winds are here at 12:15 am.  Things getting blown around.

Nice to be safe inside!