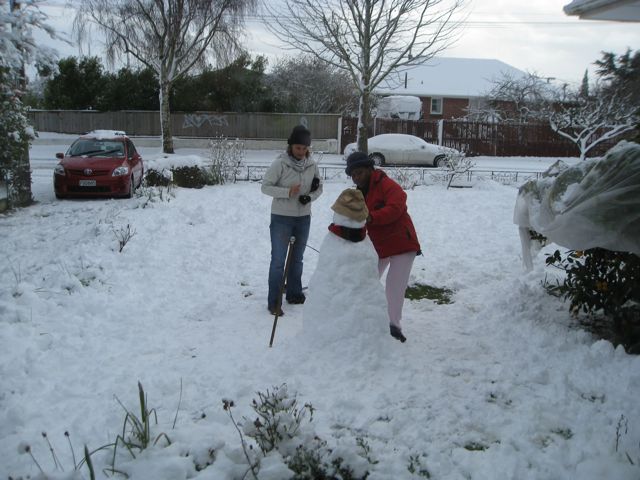 Computer models are holding fast and true in the main as it continues to track a sizeable snow storm due to hit parts of New Zealand tomorrow.

There is potential for some record breaking snowfalls over the next few days in pockets of the country and it appears that waves of snow activity will sweep up southern and eastern parts.

” The start of the coldest air still seems to be arriving tomorrow and perhaps a little earlier than we thought during the day” according to Weather Analyst Richard Green. ” It seems to be coming in waves, with the first band moving through later tomorrow and overnight before a possible easing for a part of Monday in the south. Now for some people they might think there’s not much snow but a heavier surge should arrive later on Monday and Monday night ” says Richard Green.

Indications are for places such as Canterbury that snow could be around 20cm deep in Christchurch, possibly up to  30-40 cm during the whole event and heavier falls on the Port Hills and further inland.

“it’s difficult to give exact figures on how much snow will fall and where it will take place as there’s always a risk that these things don’t come off. We think it’s best to advise everyone as it has the potential to be quite significant so it’s always good to be prepared,” Richard Green says.

WeatherWatch believes that the wintry weather in exposed areas of the storm is likely to last up to 3-4days but cold temperatures could linger for considerably longer.

Will there be snow in Kaitaia ?

Wow, wouldn’t that be fun!!!  No chance with this system sorry – but the ranges to your south may get a dusting above 300m.  Crazy!

Hi there do you think this event will be worse then July for Christchurch?

Tough one to answer – it’s certainly a much bigger event with more severe weather – snow-wise it’s still too hard to tell.

How much snow are your models predicting for Dunedin and is it likely that the northern motorway will be closed.Also when is the really cold air likely to arrive.

Hi there – yes we expect the northern motorway to be affected or closed by snow during Sunday.  Cold air arrives early Sunday with another bigger blast coming 36 hours later.

sounds like a good time to fill the gas bottles, get some easy prepared food in and stock up on batteries for torches and radios given Christchurch’s fragile power supply. and in our case, prop up the garage roof before it completely collapses under the weight!

Good luck with that Pete!