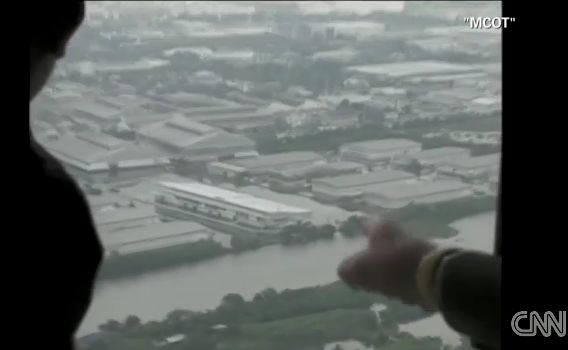 Floodwaters in Bangkok have reached Don Muang Airport, one of the Thai capital’s two main airports and home to the flood relief operation command, which may have to move to another location, according to the governor.

In addition to Don Muang, residents in five other areas should prepare for floods, move their belongings to upper floors and take shelter at evacuation centers, Governor Sukhumbhand Paribatra said in a news conference on Monday.

Thammasat University’s gymnasium, which has been used as an evacuation center, is also flooded and without electricity and is itself being evacuated, the governor added.

As a remedy, about 4,000 people will be bused to Rajamangala Stadium in central Bangkok with the help of 300-400 volunteers, according to the governor.

In the east, the industrial estates of Lat Krabang and Bang Chan remained under threat, and volunteers were sought for help with sandbagging.

The governor urged the public not to panic and to follow his reports closely.

In an interview with CNN on Sunday Prime Minister Yingluck Shinawatra said authorities were trying to control the water levels by using all the dams and dikes to cope with an unusually heavy rainy season.

Protecting Bangkok was a priority because it comprises the economic heart of Thailand, she said. “But it doesn’t mean we have no concern for the people who are suffering from the flooding,” she added.

Residents have resorted to moving out of flooded homes by boat or anything that could float — or wading through water with plastic bags of belongings balanced on their heads or pets tucked into clothes.

The government has called the flooding the worst to afflict the nation in half a century and said some areas might require more than a month before waters recede.

More high tides are expected in the coming week, which could cause rivers to back up, further raising water levels, according to Thailand’s Flood Relief Operations Command.

The government has set up more than 1,700 shelters nationwide, and more than 113,000 people have taken refuge.

Many residents waded through dirty water in the capital in recent days, as they made a desperate attempt to save their belongings.

The flooding has already killed 356 people, with nearly 9 million others affected, authorities said.

Overall damage from the floods have risen and could top $6 billion, with the worst yet to come as the waters destroy shops and paralyze factories nationwide, the Thai Finance Ministry said.

Thailand derives a significant portion of its revenue from tourism.