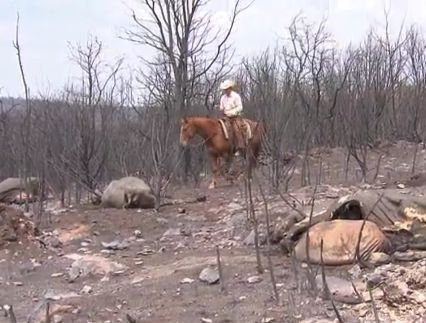 As Justin Cormack steers his horse Safari up a rocky slope on his family’s North Texas ranch, the stench of decay hangs in the air.

A week ago, where he was riding stood grasslands perfect for grazing cattle.

Now, the land is charred black, from rock to treetop.

And dozens of the Cormacks’ cattle lie twisted and burned, felled by a fire that raced faster than they could.

“That fire was going across the treetops before it burned the bottom, it was moving that fast,” Cormack said. “The smoke, coming down as fast as it did with the fire, I think they may have suffocated; and then the fire overran them as they were trying to go up the hill.”

Cormack, who’s studying to be a doctor, returned to the family ranch after the wildfires to help his younger brother Jake and their mother, Melanie, save what they could.

He is worried about the future of the ranch, which has been in their family for 25 years.

“We thought we were going to have to sell out and start over,” Justin Cormack said after learning that everything had been burned. “We didn’t even know if the bank would let us keep the lease.”

Cormack finds more dead cows entangled in burnt tree limbs and lying in riverbeds. He dismounts Safari and pulls an iPhone from his weather-beaten leather chaps to take a picture of the cows and record the precise GPS coordinates of where they fell.

Then, with a can of aqua blue spray paint, he marks a number on the cow before moving to the next one.

He isn’t sure if his family will ever be compensated for the fire damage to their cattle and property. But he documents the destruction, just in case.

The wildfires that ripped across Texas inflicted epic devastation and suffering on the Lone Star state, burning more than a million acres and hundreds of homes. This week, fire crews are on alert as hot and dry weather is forecast to return to Texas.

Few residents have lost as much the Cormacks. So far, fire has killed at least 30 of their cows — about 15% of the herd.

Justin Cormack says he finds several more burned — but alive — cows every day. The burns crisscross the cows’ hindquarters and cause their hooves to come apart.

He says most of those burned cows will probably have to be euthanized.

Even the 200 or so head of cattle that were rescued from the flames by the Cormacks are not out of danger. For those cows, there is hardly a blade of grass left to eat.

“We have 10,000 acres, and it burned all of it,” said Melanie Cormack, the stress of the events etched in deep lines across her face. “It started on the north end, burned for 11 days, and then it came around the south end.”

Melanie Cormack, who is also the school principal in the nearby town of Strawn, had to take over running the family ranch after her husband passed away from illness.

The blood caked on her hands from branding and castrating some of the cattle suggest that despite her thin frame and soft-spoken voice, she is made of a substance that even a blazing wildfire cannot melt.

But the worries are piling up.

The Cormacks’ simple white ranch house survived the blaze but has been without electricity and water for days. There is no information, they say, on when both will be restored to the desolate area where they live.

Then there is the challenge of finding food for her remaining cattle.

Neighbors and other ranches have donated bales of hay. But she will need to find new land where they can graze — and soon.

Melanie’s second son, Jake, works alongside her to round up their surviving animals and get them to new pastures. When the wall of fire barreled into their ranch, Jake raced the flames in a truck to save as many of the cattle as he could.

“It was one of the scariest sights I have ever seen,” he said. “Just a humongous cloud, and it’s red in the front and it’s going pretty quickly across the countryside.”

Jake Cormack said his family will fight to hold on to their land and their cowboy way of life. The blackened earth will grow grass again, he said, and cows will once more graze contentedly on the Cormack ranch.

But he will not soon forget the inferno that almost took it all away.

“It’s just like a hurricane or a tornado: Whenever it hits, it creates destruction,” he said. “Same thing with a firestorm: It burns houses, people put their lives at risk, some people die. It can ruin lives real fast.”

A sad story for Jake’s ranch. I love his attitude to get on with life.