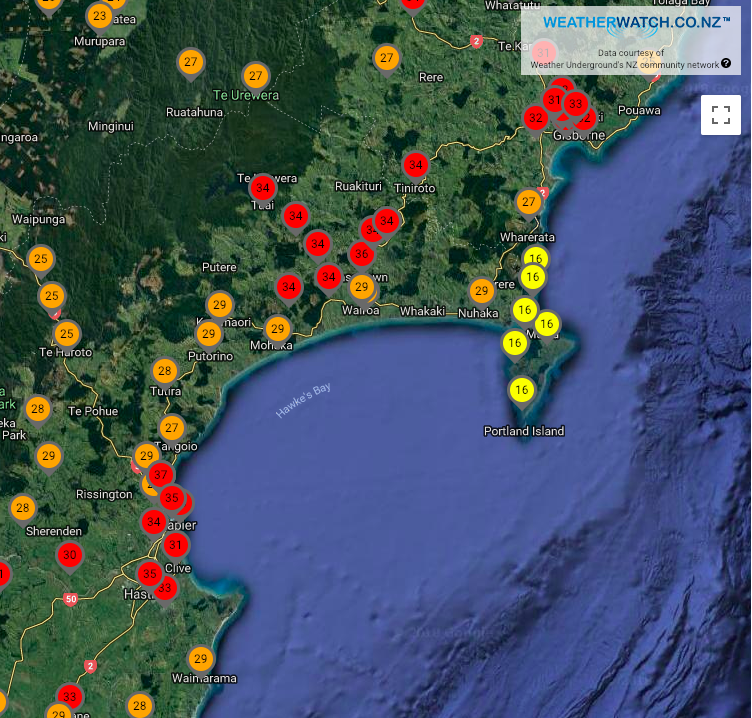 Temperatures are going above what was forecast this afternoon with temperatures up to 37 degrees at 1:30pm and the hottest part of the day still yet to come.

WeatherWatch.co.nz says it’s 37 in parts of Napier/Hastings in Hawke’s Bay.

In the South Island it’s up to 36 degrees in the Marlborough Sounds.

LIVE TEMPERATURES can be found here:

What a difference the #TararuaRanges are making right now! Cooler than average on the west coast, hotter than normal east coast…separated by just a 40km difference!! #Heatwave (for some) #NewZealand #weather pic.twitter.com/PJkFUjB9JG

Blenheim approaching 35C now, but I won’t buy a PWS reading of 36C in the Sounds – or a 37C one in Hawkes Bay considering readings from Napier and Hastings for comparison. My money is on improper exposure and aeration. Hot day, though, for sure.

Hey RW, Happy New Year to you! Thanks for the updates, much appreciated and tend to agree. But some weather stations in the cities are accurate but are around a fair amount of concrete and metal or tar seal. While not a ‘pure’ air reading it is very much an accurate reading for where they are and what they are feeling in the shade. Probably correct about the one specific station in the Sounds unless it’s further inland than we think. Looks like a hotter day tomorrow for some areas than today too. NW flow kicks in a bit later in the week which gives another surge of heat in new areas too.
Cheers
PD

Fair comment, could be some very high readings on Thursday

Why all the media hype?
I have seen all of this in NZ before and nothing to get excited about for goodness sakes.

No heatwave here or 46c temps to be seen.

Hi there, you can have a heatwave when temperatures are at freezing – it has nothing to do with simply how hot it is, it’s to do with a several day run of temperatures well above normal, which is the case in several parts of New Zealand. For farmers, growers and even some who are sensitive to heat this is significant, especially when temperatures are in the low to mid 30s. We can’t explain what other media outlets are running but we’ve been fairly clear (or have tried to be) in our news stories sand videos for several days about which regions will be affected and when. We’re a dedicated weather news website, the only one in the country, so we cover weather news and based on the demand from our viewers and readers many people are very interested in this event, even if a very large portion of the country is still experiencing fairly normal summer heat today.
Kind regards,
Phil D

Fair point Weatherwatch and you do a great job.

But I have seen this before, days of warm summer weather.

Other sites seem to push this as the only news event of the day.

But it is not and Farmers also go through this annually.

Thanks for the kind and honest feedback. Our focus is very much on the farming/horticulture community who often rely on our services in a much heavier way than our urban followers do. Public demand today has been much higher than expected as some places reached 30 degrees by 9am and our social media lit up when then happened, then again in the middle of the day when some weather stations – including Government ones – climbed over 36 degrees.

We proudly promote big weather when it’s big because that’s what passionate weather followers want from us and it’s why our entire brand exists! (Since 2005). Our goal this year is to be even more loca/regional l so people feel less burnt (excuse the pun!) by some of the big national weather headlines. We want people to know what the big weather headlines mean for them locally, so that’s our goal moving forward in 2019 as part of our free public services.