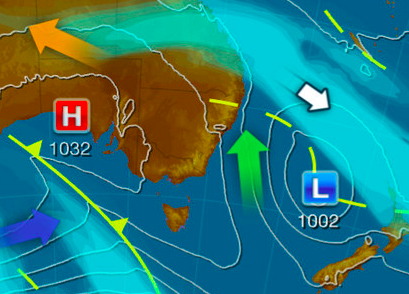 The recent cold front and complex low pressure that swept across Australia’s south and southeast led to some very interesting and significant weather impacts, including fires with strong winds ahead of the systems, snow flurries across the elevated areas of Victoria, Tasmania and New South Wales, and flooding rainfall to parts of these states.

However, it also meant a welcome relief to areas that haven’t seen significant rainfall in quite some time.

During April 2018, below average rainfall was recorded over most of the southern half of Australia. One of the major effects of the lack of rainfall has been that most of SA, VIC and NSW have reported very much below average soil moisture in the lower layer of the soil profile (10-100cm) at the end of April.

Following the event, and aside from the flooding rainfall over parts of TAS, widespread falls of 5-10mm have been reported across the south and southeast of the country. Most of VIC and southeastern parts of NSW recorded falls of 25-50mm, with some locations in VIC picking up close to 100mm.

Strong winds in the wake of the system now located over the Tasman Sea are still prompting wind and hazardous surf warnings along the NSW coast, likely lasting until at least Monday 14th.

Although rainfall has helped to raise soil moisture and increase storage volumes, TAS, VIC and NSW still reported the lowest percentages of total water storage for all states and territories as of 12 May 2018 in the wake of the event. NSW in particular reported only 40% of storage capacity, the lowest of any state or territory.

The rainfall outlook for June 2018 is optimistically picking at least average rainfall for most of NSW, and potentially even a bit above average for eastern VIC and northeastern TAS. However, western VIC is expected to receive below average rainfall, and to a lesser extent parts of coastal SA and southwestern NSW.