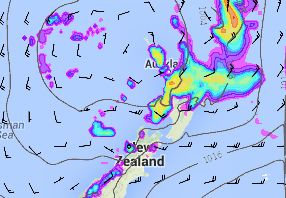 A low that brough intense rain to Queensland on Friday night will move across the North Island this week bringing pockets of heavy rain and showers to the upper North Island and parts of the South Island predicts WeatherWatch.co.nz.

Over the weekend record breaking heat pushed into Auckland ahead of this next syetem, with the temperature reaching 26 degrees on Saturday – Government forecaster MetService says this temperature broke the previous November heat record of 25.5 – set in 1974.

The hot weekend weather did more to dry out the upper North Island.

However the low moving in this week always had the hallmarks of bringing a better chance of rain than previous systems.  “This low may not be packed with energy but it is in the right position to be slow moving and to be pulling down humid, warm, air from the sub-tropics – at this time of the year that is the recipe for very heavy downpours and possible thunderstorms”.

Mr Duncan says rain maps show some intense downpours developing over northern and western regions of the North Island from Tuesday to Thurday with rain also making it into the South Island.  Dry spells with drizzle is also in the forecast.

“This is not a widespread national rain event but certainly some of the driest regions should get some rain – and some farms and gardens may get quite a downpour”.

WeatherWatch.co.nz syas the start of December also looks unsettled but any signs of a cooler change appear to be fast melting.  “A week or so ago the long range models were indicating a colder change after this current hot spell – while winds do turn sou’west for the first day or two of December temperatures may tumble 4 or 5 degrees – but for Auckland that means down from record breaking heat and back to normal for this time of the year”.