Tasman low this weekend – West Coast in for heavy rain 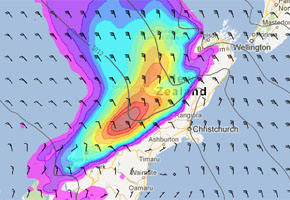 A fairly large low pressure system moves into the Tasman Sea this coming Saturday and sandwiched between it will be an increasing moist northwesterly airstream over New Zealand with an anticyclone slowly departing the North Island.

At this stage the low is looking to slip to the south of the country on Sunday and a more general southwesterly air change moves over early next week. This means that the West Coast of the South Island should be in for cloudy weather and rain heavy at times from Friday, the North Islands West Coast shouldn’t see any rain till later on Sunday or early Monday.

Totals on the West Coast of the South Island at this stage are looking to be quite high beginning early Friday morning with 200 to 250mm possible then easing later on Saturday or early Sunday, so if you are planning any outdoor activities there please keep an eye on weather warnings for this coming weekend. East coasts of both Islands will be in for some great weather and mild temperatures, although high cloud and strong northwesterly winds inland will affect the South Island in particular and there is the chance of a few brief showers spreading off the ranges at times from the west on Saturday and Sunday.

Late Monday and then Tuesday next week people from Otago right up along the east coast to Gisborne will get some wet weather as the flow changes to the south but that is a while out and some details could change.

In summary, main features to watch is heavy rain about the South Island’s West Coast and the Southern Alps from Friday, 200 to 250mm of rain possible. Also strong northwesterly winds in inland areas of the South Island’s east coast. Weatherwatch.co.nz will keep you posted.

Looking forward to some warm north-westerlies here in Canterbury.

Things have changed after the 2 flood events in Runanga last month, so this will be the first test of the work that has been performed since then. Not overly keen on 250mm’ish but that’s the luck of the draw here on the coast I guess.