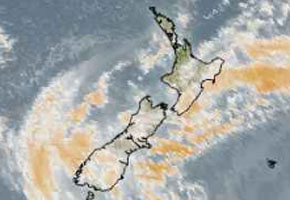 Showers or drizzle has spread to most places by now but there are a few dry pockets out there to, rain has just picked up in intensity for parts of Christchurch. By evening rain will have become more widespread however parts of the West Coast will continue to get more showery type weather.

It is currently 11 degrees in Nelson, 10 in Christchurch, 12 in Hokitika and ranging between 8 and 9 degrees in Southland and Dunedin.

Rain from a frontal band is sitting over central and eastern areas of the North Island currently. There were many sunny areas after it had passed through, further north however another band of showers is moving southwards now currently about to enter the Waikato, a few of those showers could be heavy.

Auckland is on 14 degrees, New Plymouth 15.5, Wellington 13.5, Napier 13 and Central North Island towns are in the low double figure range.

um what rain lol currently warm and sun is out here in culverden and when i zoom into your weather maps there is almost a pocket that sits over us with lighter rain and the real heavy stuff is all around us for the most part of the next few days do you think we might miss all the heavy rain?