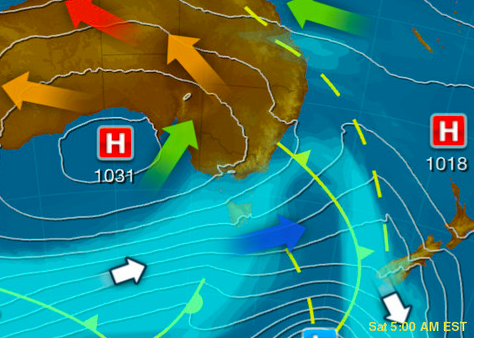 Sydney’s prolonged run of pleasant weather during the last couple of weeks was also the cityâ€™s warmest fortnight this late in the season on record, based on consecutive maximum temperatures.

Sydney is forecast to register its 14th consecutive day in the mid-to-high twenties on Friday, with the city forecast to reach a top of 28 degrees.

While maximums have only been several degrees above Aprilâ€™s average maximum temperature of 22.5 degrees during the last two weeks, itâ€™s unusual to have such a long spell of days this warm, this late in the month.

Maximum temperatures have ranged from 23.9 degrees to 27 degrees during the last 13 days and today, Friday, is forecast to reach 28 degrees in the city.

This will be Sydneyâ€™s longest spell of days this warm, this late in the season, in more than 160 years of records.

The cityâ€™s record run of warm weather will come to an end tomorrow as cooler southwesterly winds flow across the Sydney Basin, in the wake of a cold front.

Saturdayâ€™s forecast top of 19 degrees will be Sydneyâ€™s first day below 20 degrees so far this year. Sunday morning’s low of 10 degrees will also be a first for 2019, forcing an overdue reshuffle of wardrobes across the city.