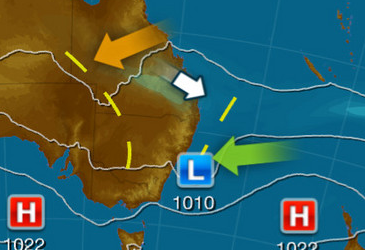 Sydney and Brisbane both broke their summer heat records, making it feel as if locals moved hundreds of kilometres north for the summer.

Sydney averaged 20.9 and 28.8 degrees for minimum and maximum temperatures this season. This compares very closely to Brisbane Airport’s average summer of 20.8 and 28.7 degrees, some 700km further north. Bankstown and other central suburbs were also very comparable to the long term average for the Brisbane suburb of Amberley.

Sydney’s west was even more extreme, with average temperatures in Penrith very similar to Roma’s typical summer of 20.1 and 33.3, a town some 700km north and 400km inland from the coast.

Not to be outdone by their southern neighbours, Brisbane also shifted a long way north.

The city finished summer with averages of 22.2 and 31.2. These summer temperatures would be much more typical 500km north in Rockhampton, where the airport averages 21.8 and 31.7.

The reason why the eastern capitals had such extreme summers was a combination of a negative phase of the Southern Annular Mode (SAM) and climate change.

The negative phase of SAM leads to more frontal activity across the south of the nation, leading to more frequent westerly winds that draw heat from the centre and west of the country. The background influence of climate change has intensified this heat such that a plethora of records were broken through the season across NSW and southern QLD.