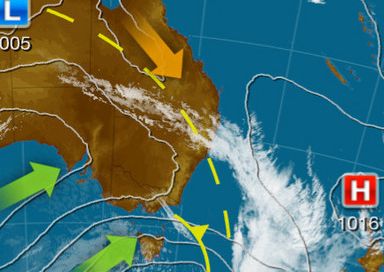 Horsley Park had its warmest December night in at least 15 years as the Sydney Basin barely cooled overnight yesterday.

Monday was hot in Sydney’s west, while it was very warm and humid in the east with a seabreeze. The cloud cover that developed in the afternoon lingered overnight, keeping the daytime heat near the surface like a blanket.

The city had its warmest night since January, only dropping to 23 degrees after its maximum of 30, while Horsley Park only fell to 24 degrees.

It was a great night for a family BBQ or a trip to the first pre-season day at Wet ‘n’ Wild Sydney.

Tuesday was also very warm across Sydney, reaching 33 degrees in westerly winds that were strong enough to hold out the seabreeze. This is the hottest pair of days since last summer.

Yesterday afternoon a weak southeasterly change had already started to move in, dropping the Airport from 34 degrees to 28 degrees in under 30 minutes. This cooler air and the lack of cloud cover will lead to a slightly cooler night with most suburbs expected to fall to about 18 degrees.

It will be over a week until Sydney is as hot as it has been today and yesterday, as a cooler airmass will move in with the chance of showers from Friday.