Home > News > Sydney gets soaking and more to come...

Sydney gets soaking and more to come 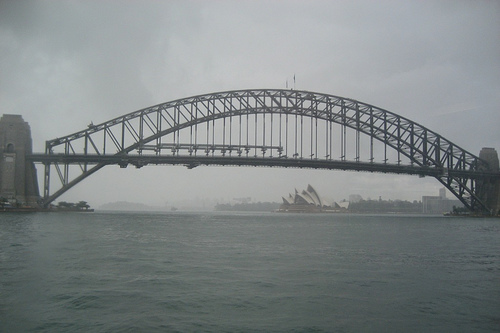 It’s not only on this side of the Tasman that changeable weather has been a talking point as Sydney has had the rain in decent doses.The heaviest rain in months has soaked the big city in the last day or 2 and is set to return tomorrow.

The highest rain totals were picked up on and west of the ranges. Orange gained 48mm in the past 24 hours, their heaviest November rain in six years.

Again today moist southeast winds should bring the chance of showers today, particularly this afternoon. Rain will return to Sydney tomorrow, with a low moving in from the west. The low will move off the coast on Saturday, bringing further scattered showers. The sun should make an appearance later on the weekend as the low heads across the Tasman Sea.

Sydney does appear to have got off lightly in terms of wind strength but the heavens have been providing plenty of moisture and some of it could be heading our way yet again in the not to distant future.