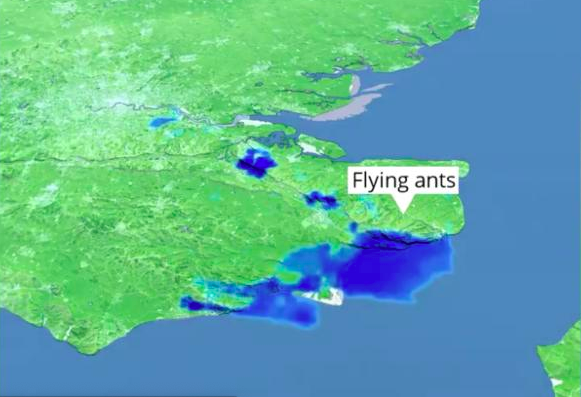 You can add giant swarms of flying ants to your 2020 scary-sounding insects Bingo card alongside murder hornets and hordes of noisy cicadas. The UK’s Met Office shared radar imagery that showed the ants flying over the southeast part of the country.”It’s not raining in London, Kent or Sussex, but our radar says otherwise,” it said in a tweet on Friday.

It looked like rain on the radar, but a meteorologist with the country’s weather agency said it was “dry, hot and sunny” at the time. The swarm was visible on radar for about two hours on Friday morning.

The forecasters’ satellites didn’t show enough clouds to produce rain in the area, she said.They suspected insects because the particles didn’t look like raindrops and were longer than they are wide — like a bug.

Their hunch was confirmed when people in the area started posting about the swarm with the hashtags #flyingants and #flyingantday.

There were also reports along the eastern part of the country that did not show up on radar, she said. The ants’ have become a summer tradition in Britain and many people call their annual appearance Flying Ant Day.

The phenomenon occurs when young queen ants, followed by males, leave their nests to breed and start new colonies. The weather conditions have to be just right, which is why so many ants choose to take off at the same time, according to the Royal Society of Biology (RSB).

They may be annoying, but the ants are also good for the environment, according to the RSB. They improve soil fertility and aerate the ground so more water, oxygen and nutrients can reach plants’ roots and wind up as meals for birds and other predators. The ants aren’t harmful, so the RSB suggests ignoring them until they fly off on their own.

CNN.com (*WeatherWatch.co.nz is proud to be a CNN International Weather Affiliate)