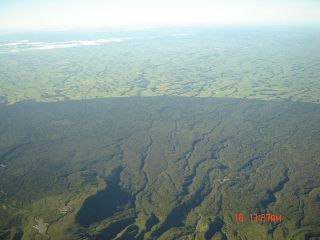 It’s been a while coming but today should see most regions receiving sunny, settled, weather as a large high moves in from the west.

The high doesn’t look likely to dominate our skies but should bring a mainly sunny, calm, end to the week across both islands.

The anticyclone, centred out in the Tasman Sea, will partially spread over the nation until the end of Friday when a front from the Southern Ocean will surge north bringing snow to low levels in both islands and see daytime temperatures take a further fall.  The snow isn’t predicted to be heavy in low lying areas.

Snow may also affect the Desert Road on Sunday or Monday as the southerly heads north.  Auckland’s likely to see daytime highs reach just 11 or 12 with wind chills in the mid-single digits as the south easterlies pick up during Sunday.

Meanwhile a sub-tropical low is going to fuel the strong winds this weekend in the north.  MetService says they have moderate confidence of severe gales in Northland, Coromandel Peninsula and Great Barrier Island this Saturday or Sunday with low confidence in Auckland, eastern Waikato, East Cape, Gisborne and northern Hawkes Bay.  WeatherWatch.co.nz expects the strongest winds to be on Sunday.

The weather is expected to clear again early next week for many regions however computer data shows another cold snap is possible again next week.

i herd that masterton could see snow on sunday? is this correct? it is are but we have had snow this year allready

Hi Mark, no we don’t expect snow in Masterton this time around.  Snow on the ranges certainly, but despite a cold southerly arriving on Sunday the high is still expected to reach 8 or 9.