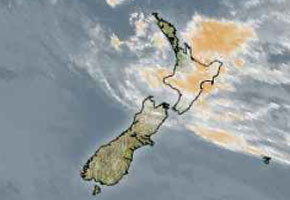 Over the North Island skies are mostly cloudy however temperatures are a bit mild especially north of Auckland where it’s hitting 17 or 18 degrees. It’s currently mostly dry in Northland however a few showers are likely to get going this afternoon, dry for most of Auckland also as I write this article however showers are set to redevelop from the northeast.

The rest of the North Island looks fairly wet with temperatures in the low to mid teens from Waikato through to the Bay of Plenty, then further south only low double figures as high’s are affected by more of a southerly influence.

It’s looking fantastic on the South Island’s West Coast with light winds and sunny skies, a bit of high cloud north of Greymouth. It is currently on 16 in Hokitika with 15 in Westport. The very top of the south around Nelson and the Marlborough Sounds are getting a few showers today however the rest of the island is dry.

Areas of cloud north of Christchurch along the east coast then sunny further south with little to no wind. Temperatures in the low double figures for most this afternoon, high single figures in Central Otago.