Sunny…but for how much longer? 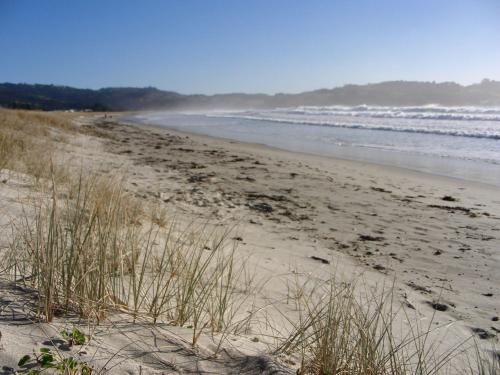 Sunday has certainly earned it’s name today with mostly sunny skies again across the country.  Clouds still remain over parts of Hawkes Bay and Gisborne but the weather should eventually clear by the end of today.

As of 1:30pm it was mild in many centres with Aucklanders noticing a definite decrease in the southerly wind speed.  Those in Christchurch were enjoying clear skies and a cool nor’easter with similar sky conditions in Wellington and Hamilton.   In Dunedin high cloud was building ahead of a developing low int he Tasman Sea.

The light winds have helped boost temperatures in northern New Zealand – it’s 18 degrees this hour in Kaikohe, with 16 in Auckland and Whangarei.  It’s 14 across the Bay of Plenty with just 10s and 12s across coastal parts of Gisborne and Hawkes Bay.   New Plymouth has 16, Palmerston North 13 and only 11 in Wellington, Wanganui, Paraparaumu and Levin.

Clear skies, nice surf, and only a hint of the southerly.  Photo / Gavin Smith.  To comment on this photo click here.

In the South Island Christchurch has a nor’easter and 12 degrees, and in Dunedin a northerly has helped push the temperature to 16.  Queenstown has just 7 degrees while Invercargill has 9.  13 is common across other parts of Canterbury.

Cloud is moving in from the Tasman Sea ahead of a developing low.  The high over New Zealand is a solid one and will take a number of days to slowly move out in to the Pacific.  That means a gradual shift to easterlies and north easterlies across many centres and a gradual increase in temperatures both at night and during the day.  Cloud cover will also build slowly as the week progresses with drizzle likely in Auckland by around Thursday or Friday.

Next weekend doesn’t look so sunny and dry.