Home > News > Sunnier tomorrow for some...

Sunnier tomorrow for some 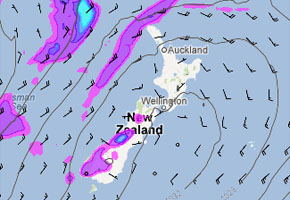 The weather will be sunnier tomorrow for some as an anticyclone moving in from the south begins to take control. There will likely be some cloud along the east coast of the North Island and a few morning showers clearing about Gisborne, also Northland will remain mostly cloudy with the odd shower in a southeasterly airflow. Sunnier elsewhere in the North Island with a few areas of cloud and light winds.

Sunny areas and some cloud here and there in the South Island, winds will generally tend northeasterly perhaps a bit cool along the Canterbury and Kaikoura coastline. In South Westland expect mostly cloudy skies with a few drizzle patches at times.

Saturday afternoon and now Sunday afternoon also is still showing a chance of afternoon showers about Central Otago and inland Southland so it will be something to watch for lovers of cumuliform clouds. The colder air arriving mid next week is still there but still a while out so just a heads up for potential thunder around then. On Monday next week an upper cold pool of air now looks like it may brush eastern areas of the North Island, this could provide a shot at some convective activity then so worth a note to keep a look out.