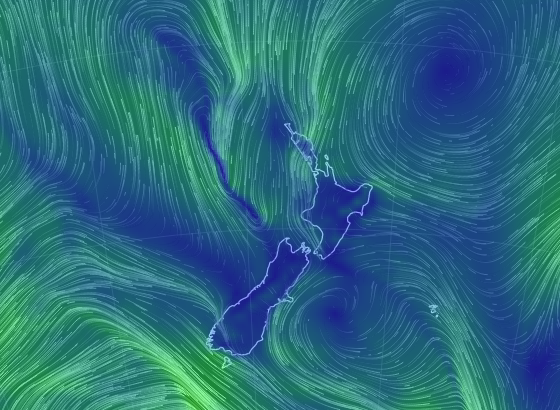 Updated 9:52pm — Rain will clear the North Island faster and not linger as long thanks to a faster building high in the Tasman Sea.

This is very positive news for those affected by recent big floods and farmers and authorities who have had far too much rain in March and April. While rainfall totals never looked to be flood-worthy this weekend the thought of another low lying over the North Island was not a welcome one as it did pose some risk.

So like a bulldozer pushing in, the wet weather will be shoved eastwards and mostly dumped out over the Pacific Ocean. Eastern regions of the North Island may still be affected by rain on Monday thanks to the cold, brisk, southerly lingering out in the Pacific.

The high will dominate the South Island until Tuesday, for North Islanders Wednesday.

A bigger cold blast?
Thursday and Friday sees what looks to be an even bigger cold change coming for much of New Zealand following this high…we’ll keep you posted as this chaotic weather pattern continues but temperatures look likely to drop in many places later this week as the southerly pushes northwards – there may also be snow on some highways.

This second cold snap also looks short lived with a possible replacement big high coming in from the Tasman Sea for the first weekend of May. We’ll update you again once this current system has passed through (another 48 hours).

The current focus:
Just because the rain is clearing earlier than thought doesn’t reduce the chance of heavy falls which may still flare up overnight / Sunday morning, mainly in northern or north eastern parts of the North Island. Otherwise, this event is moving through faster than we forecast.