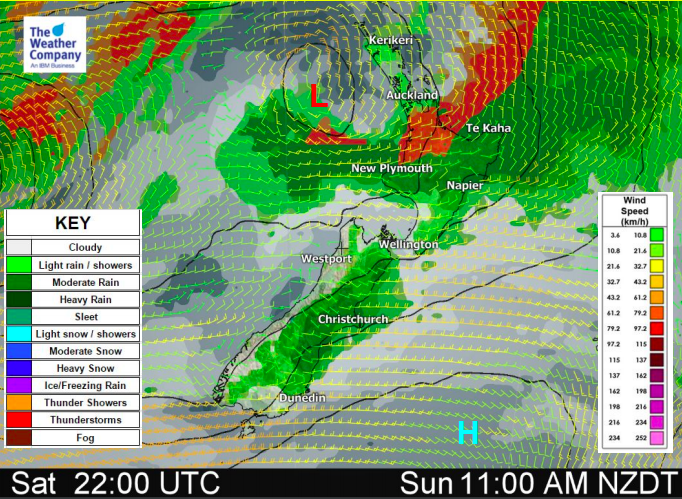 The large low that recently affecting southern and eastern Australia continues to move towards New Zealand and brings another day of downpours in the north and patchy rain and showers elsewhere.

NORTH ISLAND:
Morning rain or showers again push down from the north and should intensify further as it moves into the central North Island and Bay of Plenty, fed by northerly quarter winds. Heavy falls are possible in BOP, East Cape and even Gisborne. This front moves into the eastern and lower North Island in the afternoon (rain likely in dry Hawke’s Bay). Should stay dry or mainly dry in Wellington until much later in the day with rain at night. There may be a few thunderstorms in the central North Island.
Highs: 16 to 23

SOUTH ISLAND:
More patchy rain along the eastern coastline from Coastal Otago up to Marlborough. Perhaps a few heavier falls in Canterbury here and there, especially inland. Driest in Southland and the West Coast but a fairly dry day in Nelson and Blenheim too – but late rain arrives and may be heavy at night from the north. Winds generally from the easterly quarter. Coolest weather in coastal Otago, warmest on the West Coast.
Highs: 12 to 24

*Check your local detailed forecast for the latest updates.