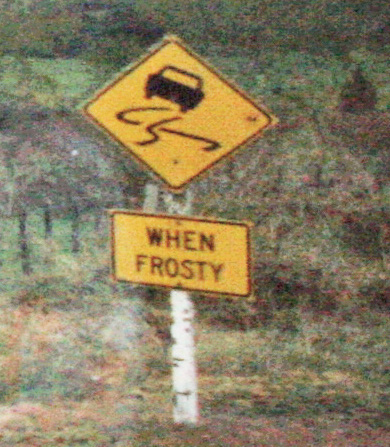 A slim break in the weather today, enjoy it while it lasts. A narrow anticyclone is pushing east over us before the next system moves in from the Tasman Sea.

Mostly sunny weather expected over the North Island with light winds tending southerly in the morning then dying out. High cloud develops about Auckland in the morning and after midday in the West. There will be some morning showers clearing about the east coast however with sunny periods in the afternoon, chilly southwesterlies ease there. High’s of around 14 degrees for Northland and the Bay of Plenty, 10 to 12 degrees can be expected for most other areas.

A good frost this morning, temp at our place was 1deg, the park behind us was very white. Turned into a beautiful sunny day, little or no clouds to be seen as yet. Temp now @ 1315 is about 13-14 deg.

First true frost @ -2c this morning in lower Northland. Not quite a water trough freeze over but not far off. High cloud also starting to move in here also.The only break in our weather will be this new system coming in. Our weather this past week has been great with plenty of sunshine.
35 mils to date has fallen which is a bit less than average for June.
Spent a very nice sunny day at Fielddays yesterday. Apart from a cool southerly breeze which was easily avoided at the exhibits it was very pleasant.

Hi Steve – ouch that’s fairly cold for Northland – and yep the high cloud now spreading into Auckland and soon Waikato and Coromandel Peninsula.  Nothing worse after a cold morning than clouds to roll in as it gets very cold unless a warm northerly wind picks up – and for many that may not be until tonight!

Thanks for the update – and I was also down at Fieldays this week, weather was amazing apart from Friday morning.

Not as bad as when I was growing up here in the 50s Philip. Nothing for a few water troughs frozen during this time of year. Warmed up nicely after a bit of fencing.
Cheers. Thanks for the reply

Good to be reminded of the past – our memories can be quite selective and we sometimes forget some years produce heavy frosts some produce warmth – the weather is chaotic by nature.  Thanks for the update, stay warm.

Typical Auckland has cloud invading now as high cloud,no doubt in an hour or two be overcast after a clear night.