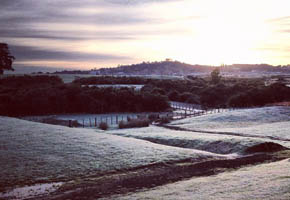 A cold south to southwest airflow lies over the country tonight. Where skies are clear and winds drop out especially about inland areas of both islands conditions are expected to be frosty!

Canterbury
Chance of some cloud this evening with southwesterlies, mainly near the coast then clearing later. Light winds overnight and frosty.
Lows tonight: -3- -2

Southland & Otago
A few showers clearing later this evening mostly about Southland, the odd shower may remain right on the Southland coast through the night however. Some scattered cloud elsewhere. Expect west to southwest winds.
Low tonight: -5-6