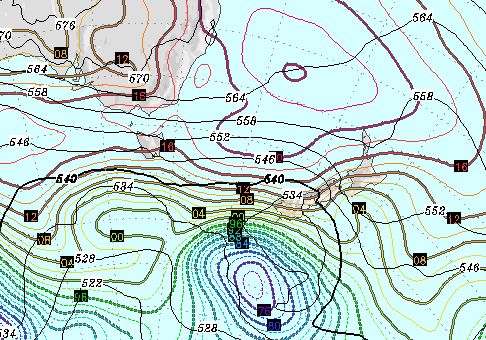 A large high that is covering the central and northern Tasman Sea will gradually spread over much of New Zealand overnight tonight and that means a fairly settled Sunday for most areas.

The word “settled” is used when weather conditions aren’t too changeable and winds are fairly calm.  It doesn’t guarantee sunny weather although most places do look dry and fairly sunny today – but cloudy periods will linger in some western coastal areas.

Despite the incoming high the centre won’t actually cross us and will instead remain about 1000kms to our west or north west.

The centre of a high marks the point of highest air pressure – and for any incoming fronts it’s the hardest place to reach.  It’s for this reason that most fronts struggle to penetrate large highs.

However a westerly blast arriving on Tuesday will dominate in the end.

Rather than penetrating the high the westerly change will instead bulldoze it out of the way.  The high will retreat to just north and north west of New Zealand on Tuesday and Wednesday allowing wind and fronts to cross the country from the west/south west for the rest of next week.