Summer’s got hot and bothered 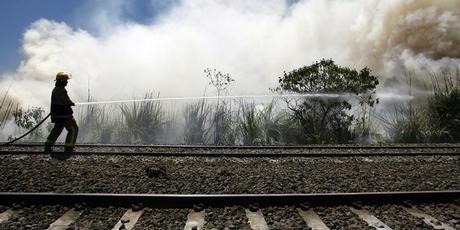 As some Aucklanders basked in glorious weather firefighters were battling scrub blazes set off by passing trains.

Firefighters were called to at least four blazes alongside railway lines between Manurewa and Papakura – one of which caused the temporary evacuation of a Takanini childcare centre – as the mercury hit a balmy 24C yesterday.

Fire Service spokesman Tony McDonald said the fires were probably the result of heat-induced sparks from passing trains igniting weeds next to the tracks.

In the Far North, residents are bracing themselves for a long and dry summer after little rain in the past couple of months.

A spokesman for Northland water carriers Kerihaul, said his company had been swamped with calls from people throughout the region whose tanks had already – and unusually for early December – run dry.

“Last year was all right because we had rain every couple of weeks but we just haven’t had any serious rain here for a couple of months,” he said.

“These are potential drought-like conditions … it’s going under us and over us but there’s nothing here. It must be close to the 30s today, we have also had a lot of wind which is drying things off.”

Niwa climate scientist Andrew Tait said soil moisture conditions in Northland were comparable with what was normally seen in parts of Canterbury and Central Otago.

He said rainfall for December was about 20 per cent of its normal levels.

“It is the most anomalous soil moisture in the country at the moment,” he said.

“It really is showing up as a particularly dry area.”

Mr Smith said showers were possible tomorrow in Auckland and Northland, as cloud developing in the west of the North Island as a trough makes its way out of the Tasman.

The rest of the North Island has a chance of rain and showers, although it will remain fine in Gisborne and Hawkes Bay.

Thanks Zelda. Could see the grey sky through the curtains and was going to get up and have a look out the window to see if it was raining yet.

Drizzle over New Lynn at Present.

For those who are not up to speed on all this Global Warming/ Climate Change stuff, the following video presentation should clear up a few misconceptions on this controversial topic!

…obviously the youtube link is not working for some strange reason, but the second link works!