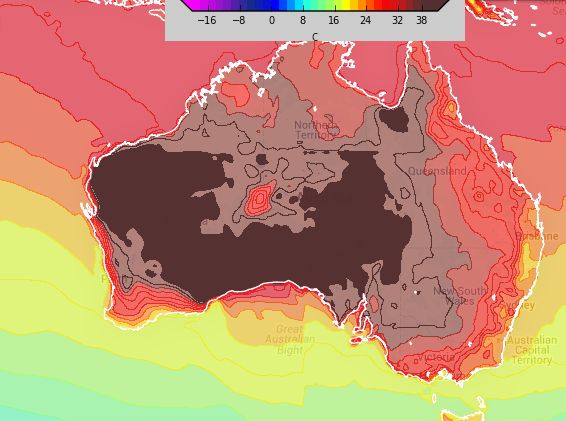 Temperatures are soaring in Western Australia and this hot air mass will make its way east next week.

Perth started its heatwave of five consecutive days over 35 degrees on Thursday with each day until Monday set to reach the high 30’s. This will be Perth’s earliest such heatwave in the season in 71 years. This heat will produce testing conditions for players and spectators at the third Ashes Test.

The heat will then gradually push into the nation’s south with Adelaide and Melbourne expected to see temperatures rise each day towards a peak on Thursday next week. Adelaide will see a pair of days on Wednesday and Thursday near 40 degrees. This should be its hottest pair of December days in three years. Melbourne is set to go almost as high as Adelaide on Thursday as northerly winds transport this hot airmass deep into the southeast.

Sleeping will be a challenge on Wednesday and Thursday nights for those without air conditioners as the heat of the day will take a while linger well into both nights from Adelaide to eastern Victoria.

A cool change will then push through the southeast, bringing relief whilst Sydney sees its peak on Friday and Brisbane on Saturday, although not quite as hot as Adelaide.

The reason for this prolonged heat spell moving around the country is the slow movement of a broad high pressure system to the east. As this high pushes into the Tasman Sea, northerly winds will develop over the nation and drag hot air south from the interior. A low pressure trough will then bring a cool change. However, this change won’t be too strong, leaving the risk of further hot periods around the Christmas period.

MAP: Weds afternoon next week shows much of Australia in the late 30 to early 40 degrees range / weathermap

That is warm – and to think we jump up and down in Auckland when we get 25C and call it a ‘schorcher’ – then pull out a ‘feels like’ temp to pretend we get 30C!  Imagine if we actually lived in hot temps!

I live in Christchurch and on days when we get 30+ it never feels as hot as Auckland in the mid 20’s it must be the humidity.