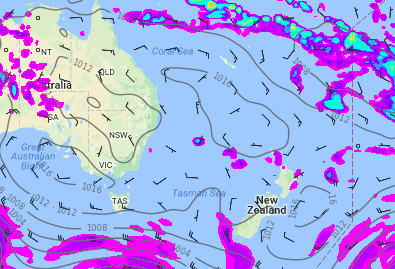 The first day of summer kicks off this Thursday and the forecast is, well, surprising. After the windy, sometimes stormy weather in November, the start of December looks settled with a large high covering both islands and bringing light winds basically everywhere.

The majority of New Zealanders, media and government agencies, here and in Australia, go with December 1st as the start of summer; even USA forecasters are increasingly going with the 1st date, as it marks the meteorological start of the season – but the Summer Solstice (a few days before Christmas Day) is the astronomical start of summer. You can pick whichever one you like. This past spring we asked readers in the first week of September if they considered it still winter or now spring – 81% considered it officially spring already while the astronomical start to spring was still 3 weeks away.

Spring has been unusual this year in that WeatherWatch.co.nz head weather analyst Philip Duncan described it as being a bit around the wrong way.  “We kicked off September with a lot of warm, calm, dry days. Typically November is when spring’s wild weather starts to ease but in 2016 November was the month spring finally got going with frequent gales, thunder and plenty of rain”.

Mr Duncan says while December clearly shares a similar pattern to November, there are signs summer weather is inching closer.  “High pressure absolutely dominates New Zealand for the first time in months and this will bring at least five or six calm days to both islands”.

The next windy day – and it doesn’t look too bad at this early stage – is for nor’westers to return around December 7 and 8 as perhaps another westerly change kicks in.

“As we head into summer the highs that have frequently been north of New Zealand this winter and spring should start to slide over us more often, bringing breaks in the windy weather and longer more summer-like sunny spells in between”.

Temperatures are likely to be average to slightly above average in many places for the start of December.