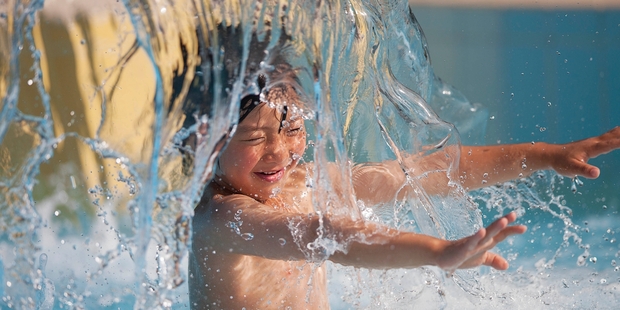 Radiant summer weather made a brief call to the North Island at the weekend, attracting hardy bathers into the still-cool water at beaches and creating a run on icecream.

But there’s no need to stock up on sunscreen yet. A partly damp week is in store for many people, while the Christmas Day forecast remains elusive (watch this space though!)

Hastings reached a truly summery 30C yesterday, while Dunedinites shivered in a daytime high of 11C. Auckland turned on a bit of heat, with 22C and a good dose of sunshine.

Kirsty Bell, of the Piha Store on Auckland’s west coast, said it was a big day for icecream sales.

“It’s been absolutely huge. We haven’t stopped all day. It’s like summer has arrived, finally.”

The sun brought the crowds to Auckland’s Parnell Baths, where the water temperature in the main pool was 20.5C yesterday.

“It’s been a lot busier, we’ve had lots of family groups come through,” a staff member said.

The water temperature at Mangawhai Heads beach was still a very spring-like 15.8C, two degrees short of the average for early December, according to surfing website surf-forecast.com. There were few swimmers in the chilly waters on Saturday afternoon and possibly as many or more beach-walkers. It was a similar story at Long Bay yesterday morning, with no rush to venture into the briny.

Swimmers were instead massed at Bayswater, on the North Shore, for the 2.9km Ocean Swim series event crossing the Waitemata Harbour.