Summer Spoiler: Cooler & cloudier continues into Jan for many parts of NZ 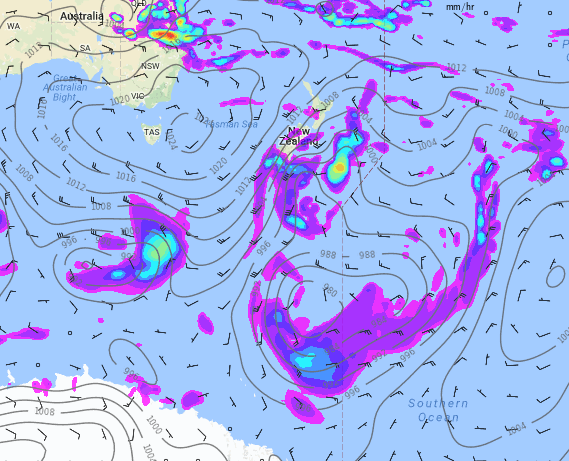 Aucklanders are noticing it. So are those in Hamilton. Also as far south as Hokitika and in Invercargill.  Summer is so far cloudy, cool and being dominated by airflows out of the Southern Ocean. If you were looking for a quick fix – we don’t see it.

In fact the latest two week computer models show a complete continuation of the cloudier, cooler, pattern of late going into the second week of January. This is due to the shape and placement of the highs over Australia as they come in towards New Zealand.

“The anticyclonic flow is scooping up much cooler air from the Southern Ocean and placing it over New Zealand”.

“So far our summer weather pattern is being dominated by Southern Ocean airflows, after a significant portion of spring was dominated by warmer than usual airflows from out of the Australian interior” says head weather forecaster Philip Duncan.

The highs may shift more over New Zealand in January, which they typically do.

While La Nina is around this summer it is weak – and it is measured at the equator, a lon way from New Zealand. With a current buffer of highs between New Zealand and the sub-tropics our weather patterns are almost entirely being controlled by Southern Ocean lows and fronts.

Australia’s eastern coastline is being affected by La Nina, however, with tropical downpours expected to increase into January for them – it’s possible we may have a slow follow-on effect later in January, but for now the reliable computer models don’t go that far out.

However in New Zealand the west and south’s downside will be to the benefit of our most popular camping grounds and holiday spots to the east. La Nina typically brings in easterlies but with this weak La Nina currently having little impact on New Zealand’s weather the westerlies are dominating – and this makes for hot, sunny weather in the east.

Today, for example, Napier and Hastings and parts of Hawke’s Bay will reach into the low to mid 30s. Hard to say ‘so much for summer’ if you live there! Many of the following 14 days look hot, dry and sunny in eastern places like the Bay of Islands, eastern Coromandel Peninsula, Bay of Plenty, Gisborne and Hawke’s Bay.   Nelson and Blenheim also look sunny and warm at times, but perhaps not quite as hot and sunny as those eastern regions of the North Island.

Below is the weather map for January 5th – and while a very long way out and may change it does show the best data in the world is still seeing south to south west changes – perhaps yet another cool, windy, showery change later in the first week.

There is one positive with this set up though – more downpours are expected for drought affected Canterbury and other dry regions in the South Island’s east – and perhaps even the lower North Island.

While some showers are forecast for the north of New Zealand in the coming 10 days the current pattern (while cloudy and cool at times) may also favour a continuation of the drying out trend which is already concerning some farmers.