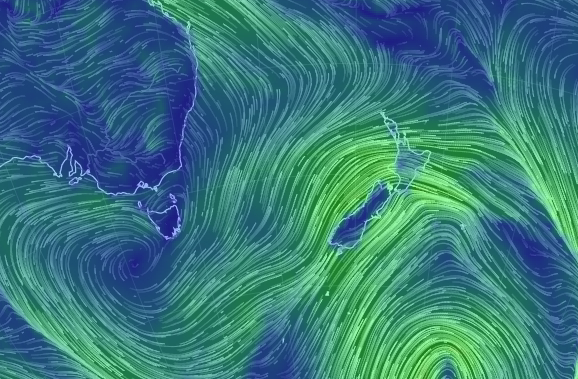 Risks will be pretty isolated in the North Island, with Wellington and the East Coast of the island looking at strong south to southwesterly winds – gale gusts are less likely but still possible, more so about coastal Wellington and Wairarapa.

Further north, Auckland and the Bay Of Plenty will likely see strong southwesterly winds too, with a chance of gale gusts – but this is more likely just offshore – with conditions easing in the evening.

Southwesterlies about coastal areas of Otago, Canterbury and Marlborough will be strong, with gusts to gale likely at times.
This will ease gradually in the late afternoon and into the evening.
Banks Peninsula and the Kaikoura coast are likely contenders for the strongest winds.

And of course there’s also a chance of some snow in the far south – Southland, and Central and coastal Otago are the most at risk places – cold southwesterlies along with showers will break in the morning, and could bring with them the conditions for an occasional snow flurry down to fairly low levels (600 or 700m).
The winds and showers will ease later in the day, however, so it could well be a brief and rare sight – February snow!