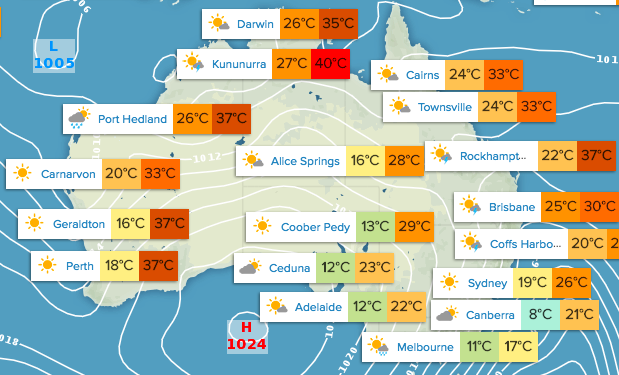 The most widespread heat in five years could grip parts of southern and eastern Australia next week.

A pool of hot air is set to sweep across the country from Monday to Wednesday, sending the mercury soaring across multiple states and territories.

While temperatures are not expected to break records, a large part of the country will be affected simultaneously due to a unique synoptic setup.

There is a significant chance that temperatures will be higher than currently forecast in some locations early next week.

Tuesday will be the standout day, with temperatures reaching the low to mid thirties from South Australia across to the eastern seaboard. This includes Adelaide, Melbourne, Canberra and Sydney, which could all see highs between 33 and 37 degrees on the same day.

The last time these four capital cities had maximums of 33 degrees or higher on the same day was February 2011. This feat hasn’t occurred during December for 51 years.

While the summer scorcher won’t technically be a heatwave for the capital cities involved, there will be two notably hot days and at least one warm night in each.

Adelaide and Melbourne are likely to be in the thirties on Monday and Tuesday and could remain above 20 degrees for at least one night. The hottest day should be Tuesday, when northerly winds could push the mercury above 35 degrees in both cities.

Canberra and Sydney will be a day behind and could venture into the thirties on both Tuesday and Wednesday, bookending a warm night in between. Wednesday will be the hottest day, possibly Sydney’s hottest in almost a year if the sea breeze is held out long enough.

Hot days like these are not unusual at this time of year, although they don’t normally affect so much of Australia’s population at the same time.

Of Australia’s 24 million residents, about 16 million live in South Australia, Victoria, the ACT and New South Wales combined and around 11 million people reside in the four capital cities. This means about two thirds of the population may experience temperatures 8-12 degrees above average at the same time.

The widespread nature of next week’s heat will put a demand on the National Energy Market, which will also be affected by thunderstorms on Wednesday with the passage of a cold front.

Fortunately, this front will flush the heat out of the nation’s southeast, dropping temperatures by around 10 degrees within the space of 24 hours.