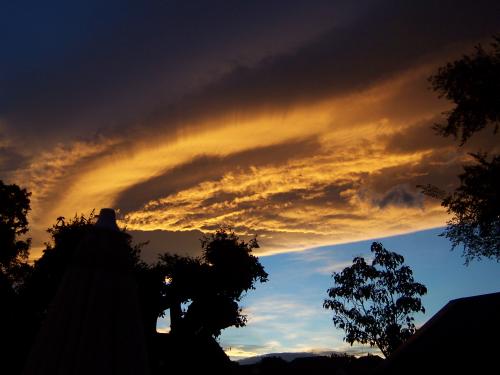 While many people across New Zealand enjoyed the rain for their dry farms, gardens and water tanks many others just want settled, summer, weather to return.

WeatherWatch.co.nz predicts that an anticyclone, set to move in tomorrow, will do just that – bringing sunnier, drier and calmer weather to both islands of New Zealand.

In the North Island lower humidity coupled with light winds should make for pleasant outdoor weather while in the South Island it will be a return to heat that will make many smile.

Yesterday some parts of the South Island’s east coast shivered under miserable conditions, including Kaikoura that was just 12 degrees at one point during the afternoon.  Wellington also had cold winds and rain.

But in true South Island style warm winds will move back in tomorrow lifting the highs into the mid to late 20s for most of the island with some inland areas hitting the 30s again.

The storm responsible for the weekend’s flooding is now moving away from New Zealand to the east and with it goes the wind and rain.

Gale force south westerlies are affecting Auckland at times today but those strong winds will quickly ease tonight with sunny spells increasing into the afternoon.

We will have extra updates on Wilma as we get them.

Just to let you know your updates and blog re the storm of last weekend was absolutely outstanding. Thank you so much for the service that you offer.

Hi Sue – thank you very much for the positive feedback – we really do appreciate it. 🙂

New Plymouth certainly got a beating. My glasshouse lost 8 panes of glass…the most I have lost since Bola. I certainly hope we get no more surprises for quite a while.

Speaking personally – this has been the worst weekend, wind wise, we have known in 5yrs here. Every apple off the trees, the 7 ft Olive tree (and its supports) almost on its side and I didn’t have to cut the rhubarb, it was all over the lawn :o) Right now the wind gusts are still strong but the temperature is pleasant. I think I need to get myself a gauge of some kind!

Roll on next weekend and Wilma :o{

PS – How does one get `verified’