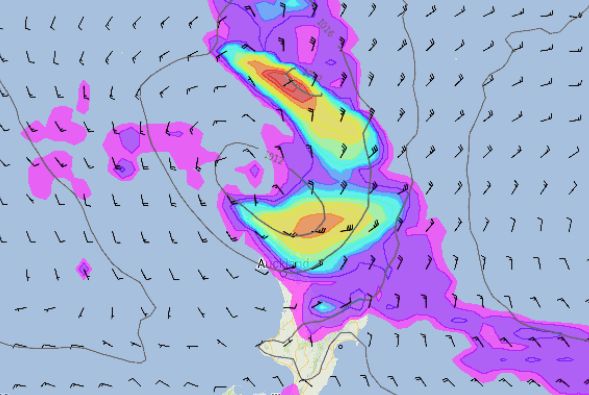 Torrential rain is associated with a fairly small sub-tropical low just north of New Zealand at the moment – and during late Wednesday and early Thursday there is a chance some of that heavy rain could push down further south over the upper North Island.

WeatherWatch.co.nz says the low is almost a carbon copy of the small northern low that passed by last week.   It would be identical if it wasn’t for the fact this low looks like it could bring more rain further south.

As with last weeks low, most of the rain will be falling out at sea around Northland but as with any low with sub-tropical connections very heavy downpours may cause pockets of flooding.

The heavy rain could affect Northland later on Wednesday with heavy falls also possible in the Auckland region and Coromandel Peninsula overnight.

By noon Thursday most of the rain is expected to have cleared.

WeatherWatch.co.nz doesn’t expect major problems but says there could be some areas of surface or minor flooding, especially about Northland.