Home > News > Sub-tropical low scoots by to the east...

Sub-tropical low scoots by to the east 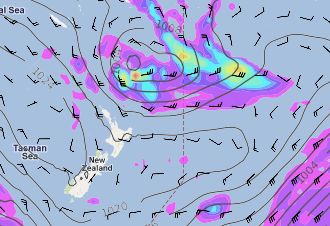 We first talked about this sub-tropical low 10 days ago and today it is finally drifting past the north east of the North Island.

The centre of the low will remain several hundred kilometres to the north east but despite the distance it could still affect our weather says WeatherWatch.co.nz.

Winds will pick up from the south east between the low and a Tasman Sea high.  They aren’t expected to be strong in most areas but could be brisk about exposed parts of East Cape and some other coastal areas in the north east.

The main cloudy areas are also well to the north east however a secondary area of cloud is sliding along the eastern coastline and could push in some high cloud at times across some northern and north eastern regions of New Zealand.

The low may also produce a few isolated showers, mostly around eastern parts of Northland and East Cape later today and overnight.

Seas will also become rougher along the North Island’s eastern coastline from the Far North to Hawkes Bay.  For marine conditions and maps go to Weathermap.co.nz.

On Thursday the low will weaken and drift away to the east with a high in the Tasman Sea still mostly controlling the weather over New Zealand.

Thanks for the link to Weathermap for marine forecasts

Means SW winds on the way,with pressures low to the SE.the SW direction sucks in Auckland in many ways.