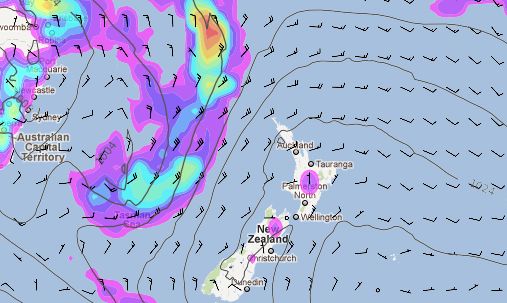 It’s still early days but long range computer models have been suggesting our first sub-tropical low this summer looks likely to be on the way midway through next week.

WeatherWatch.co.nz has been tracking the various models for a number of days and they have been consistently picking this.

The shallow low is lying off the Queensland coast and will drift slowly into the Tasman Sea as a large high – currently moving in from the Tasman over New Zealand – departs our shores to the east at the start of next week.

Head weather analyst Philip Duncan says it’s likely to bring a much needed top up of rain for dry parts of the country, but admits it has the potential to bring more rain than is required.

“While the low doesn’t look to ominious the heavy monsoon type downpours that can be associated with a system like this can be a concern especially when the heavy rain is expected to be ‘held up’ but the very slow moving high to our east next week”.

Mr Duncan says regions most at risk of sustained heavy rain will be Northland and other northern and western facing regions.  He says gusty winds will affect some areas but winds don’t appear to be a major part of the predicted system – at least not yet.

“We can’t get too detailed at this early stage.  It’s more about raising awareness of another wet event with sub-tropical connections for northern and western New Zealand next week.  We’ll have more details during the weekend”.

Do need the rain for the crops, as for most farmers and to fill the shed watertanks and house tank as well.