Home > News > Stunning from Auckland through to Otago...

Stunning from Auckland through to Otago 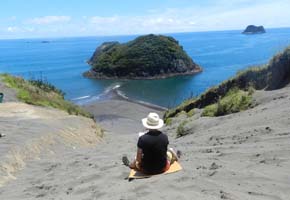 An anticyclone over the country has turned on sunny weather for most of NZ today and one point to mention is the lack of wind, it has allowed temperatures to creep up. There is some rain in Northland however and about the far south in Southland a few showers moved through this morning.

Christchurch hit 17 degrees 30 minutes ago, Auckland has similar temperatures also and Blenheim is on 16 right now. Easterly breezes will start to slowly pick up today north of Auckland however.

This afternoon there is a low risk of a few isolated showers popping up over hills and ranges in Otago, due to some cold upper air and relatively warm surface temperatures making the air a little unstable. Perhaps the most that will happen is some fluffy cumulus clouds will hover about from now onwards.

Sure no lack of wind in New Lynn. Local flag has spun around pole and blowing well. Magnificent day.

Hence the easterly breezes picking up where you are in the story above, most of the country doesn’t have much wind today but agreed, Auckland northwards easterlies are picking up 🙂

Taupo is an interesting one bucking the easterly airflow over the North Island today, a SW lake breeze has developed there.

Unfortunately, those few showers produced little moisture which is bad luck for those who are having to buy water in Southland.

Yes there hasn’t been good rainfall down south in a while, yet everyone on the east coast down to Otago had had enough of the rain. Hopefully with the more springlike pattern that has now developed it might mean more areas of rain move over with fronts coming up from the south. Early next week looks like the first shot at some wet weather for Southland.

The 7 – 10 day forecast almost always says rain and it’s been like that for close to two months.