Students due just minutes after tornado 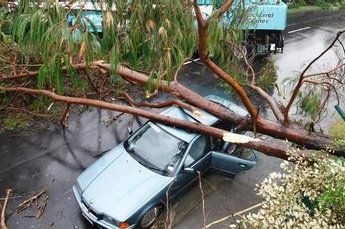 The tornado struck Glenfield College and scattered pine trees across a road just minutes before students would have been walking underneath them.

Glenfield College principal Ted Benton said no one was injured at the school but the outcome could have been much worse.

“We were very lucky no one was out on the road.”

He said the trees came down on top of cars and at least two waiting parents were trapped and had to be freed.

One mother had a tree come through the back of her car as she waited on Kaipatiki Rd.

“She came out of the car shaken and traumatised. She is very lucky.”

Mr Benton said had the tornado struck as little as four minutes later, students could have been walking out as the trees came down.

He said while the experience was frightening for people who saw the tornado hit the school grounds, it did not cause any damage to buildings.

Local community board member Richard Hills drove down to the college soon after the tornado hit.

He said the trees fell in an area where students usually walk and school buses wait.

Council workers had to chop the trees up with chainsaws to allow traffic through.

Further north in Albany, Pinehurst Senior College headmistress Jacqueline White was showing her students a documentary with the blinds down when she heard students making a noise outside her classroom.

She went outside to quieten them down and saw the tornado coming.

Ms White sent the students back inside before returning to her classroom to tell her students to move away from the windows.

She saw rubbish bins, a picnic table and a trampoline inside the tornado.

“It was just amazing, it looked like one of those things you see in the States.”

The tornado went across the tennis courts of the school.

Ms White said no one at the school was injured. Students were kept in their classrooms for about half an hour and school buses were delayed.

“It was a strange way to finish the day really.”

He watched from his office window as the tornado, carrying roofing iron, “touched down” twice.

“It was probably the size of a building.”

He said it was like something out of Kansas.

None of his students were injured.