Strong winds for many tomorrow 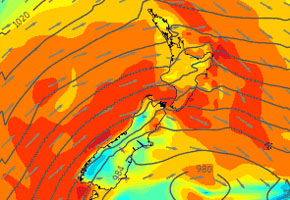 Overnight tonight and tomorrow morning a front moves over the country from the southwest, preceding it will be strong northwesterlies and behind it strong sou’westers.

Gales are most likely about the upper South Island and lower North Island, winds will equally be as strong in the afternoon as southwesterlies move through perhaps tending more westerly about the North Island’s east coast.

Northwesterlies will be strong in the morning about the North Island’s west coast also but the real kicker will be the west to southwest change later in the morning which will likely bring gale force conditions to much of the west coast.

Strong to gale westerlies are also likely for much of the day along the West Coast of the South Island down through into Southland and Otago, coastal areas being the main focus for the strongest winds.

Areas of rain may be heavy as this frontal activity moves over the country Thursday morning so take the rain jacket – but leave the brolly at home unless you want to fly away like Mary Poppins, ideally not going outside works just as well too.

I have no choice, need to get the Intercity bus tomorrow afternoon. Might need to find the anti-naus LOL.