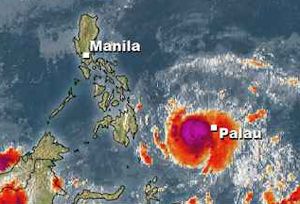 It could be the strongest typhoon to threaten the southern Philippines in 22 years.

Typhoon Bopha, packing maximum sustained winds of 250 km/h, is headed toward a direct hit on the southern Philippines.

Bopha grazed the southern islands of the Republic of Palau late last night, producing wind gusts up to 110 km/h at the US National Weather Service office in Koror, Palau.  Approximately 21,000 live in the Republic of Palau, a group of roughly 300 islands east of the Philippines.

According to the US Navy’s Joint Typhoon Warning Center, Bopha will remain a strong typhoon, possibly still the equivalent of a category-four storm, as it makes landfall in Mindanao Island Tuesday, then continuing through the central Philippines. Mindanao is the second largest and easternmost island in the Philippines.

As of the latest forecast, the centre of Bopha is expected to remain well south of Manila when it passes by early Thursday morning.  However, some peripheral rain and wind are possible in the Philippine capital.

It is unusual for a typhoon to take the track Bopha is expected to take.  A more typical typhoon track would be either toward the northern Philippine island of Luzon, then curling northwest, north, or northeast toward southeast China, Taiwan, or Japan.