Home > News > Strong northwesterlies are on the way...

Strong northwesterlies are on the way 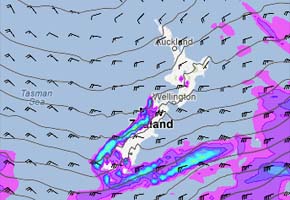 Late last week on Friday I mentioned the possibility of strong northwesterly winds mid to late this week developing over the South Island, that does look like coming to fruition from tomorrow.

Northwesterly winds will be fairly strong across the South Island tomorrow mainly from afternoon with inland areas getting the biggest gusts, winds could reach gale force at times in exposed areas like the Rakaia Gorge for example. The winds are likely to ease later overnight however picking up again on Thursday afternoon.

The result of these northwesterly winds will be fairly familiar to most, a warm day out east in both Islands with temperatures getting into the high teens. Skies will likely be cloudy on the West Coast of the South Island tomorrow with showers at times south of Westport. In the North Island for most places bar Wellington and the east coast winds will be breezy from the west or southwest, expect cloudy areas and some sun with the low risk of a lingering shower about western coastlines.