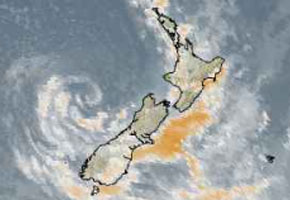 Westport currently has quite strong northeasterly winds at 59 kmh gusting to 72 km/h, the winds are coming around a low pressure system of 985 hectopascals sitting just west of the South Island.

Overnight the ranges in behind Motueka have received the most rain for the past 24 hours notes WeatherWatch.co.nz with up to 50 mm falling, this is due to the northeasterly airflow that is coming in ahead of a low pressure system just west of the South Island. As the flow moves into Tasman Bay it acts like a funnel and can cause heavy rainfall in that area.

The warmest temperatures today are about the top of the North Island, Whangarei claiming the warmest high so far of 22 degrees. The humidity has also increased in the far north.