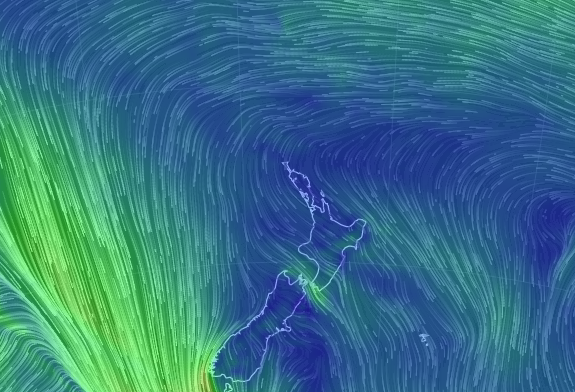 Finding it a bit hot and muggy? You’re not alone.  For the next 24 to 48 hours New Zealand is under a stream of humid and subtropical air spilling southwards over us.

Overnight lows tonight and tomorrow night will be in the late teens for many areas, some hovering close to 20 degrees at the coldest point. With humidity closer to 100% overnight the ‘feels like’ temperature may be closer to the low to mid 20s for sleeping.

The cloudy weather may not make for overly warm days in the north or west, but a touch of sunshine in the afternoon (as we saw on Wednesday) can significantly lift the ‘feels like’ temperature with the high humidity.

As of 10:30am Auckland was 1 degree warmer than it was overnight, at 20 degrees.  Humidity right now is 90%. For those working outside it will feel more like the mid 20s, then mid to late 20s into the afternoon. This doesn’t apply to Auckland only – but actually for many North Island regions under similar conditions today.

In the South Island it’s also a bit humid – but the nor’wester tends to be much drier for many of the main centres.  The moisture in the air somewhat evaporates as the nor’westers speed up down the ranges along our eastern coastline.  So although it’s hotter in the South Island’s main centres right now, with 24 degrees in Christchurch and 23 degrees in Dunedin, the humidity levels there are much lower – around 30% to 35% – so the ‘feels like’ temperature will be closer to the actual temperature.  In other words – most of New Zealand feels about the same temperature this morning!

The humid weather eases on Sunday for most of New Zealand – but may well return next week as northerlies come back.