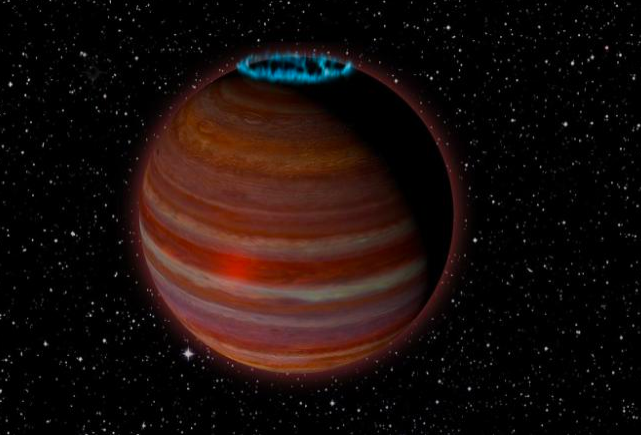 A strange 200 million-year-old object with the mass of a planet has been discovered 20 light-years from Earth, outside our solar system. The “rogue,” as it’s referred to by researchers, is producing an unexplained glowing aurora and travels through space alone, without a parent star.

The object, named SIMP J01365663+0933473, has 12.7 times the mass of the gas giant Jupiter, the largest planet in our solar system. It also has a strong magnetic field that is more than 200 times stronger than Jupiter’s.
The temperature on its surface is more than 1,500 degrees Fahrenheit. Although this sounds hot, it’s quite cool compared with the sun’s surface temperature of about 9,932 degrees Fahrenheit.
So what exactly is this rogue object?
A study published this month in the Astrophysical Journal Supplement Series includes details from the detection.
This is the first radio-telescope detection and first measurement of the magnetic field of such an object beyond our solar system. Astronomers found it using the National Science Foundation’s Karl G. Jansky Very Large Array radio astronomy observatory in New Mexico.
The surprising find is peculiar because it could be a planet or a brown dwarf.
Brown dwarfs are often considered too massive to be planets, but they aren’t quite massive enough to sustain the process of hydrogen nuclear fusion at their core, which powers stars. The first brown dwarf was discovered in 1995, although they were first theorized in the 1960s.
“This object is right at the boundary between a planet and a brown dwarf, or ‘failed star,’ and is giving us some surprises that can potentially help us understand magnetic processes on both stars and planets,” said Melodie Kao, study author and Hubble Postdoctoral Fellow at Arizona State University, in a statement.
The difference between a gas giant and a brown dwarf has been the subject of debate among astronomers. However, they agree that a dividing line can be achieved when an object is around the size of 13 Jupiter masses.
When this object was discovered in 2016 along with four brown dwarfs, scientists believed that it was older and more massive. Last year, an independent team of scientists discovered that it was actually part of a young group of stars and less massive.
They were able to determine its mass and determine that the object could be a free-floating planet.
Kao heard those results when she was looking at the newest data from the radio astronomy observatory, which helped the researchers determine the strong magnetic field. That field is also helping produce the auroras, which gave off the radio signal they detected. The auroras are similar to those on Earth that happen when our magnetic field interacts with solar wind.
Brown dwarfs can produce strong auroras as well, but the cause behind them is unclear because they don’t have solar wind from nearby stars. One theory is that auroras happen when a planet or moon interacts with the brown dwarf’s magnetic field.
“[This presents] huge challenges to our understanding of the dynamo mechanism that produces the magnetic fields in brown dwarfs and exoplanets and helps drive the auroras we see,” said Gregg Hallinan, study co-author and assistant professor of astronomy at the California Institute of Astronomy, in a statement. “Detecting SIMP J01365663+0933473 with the VLA through its auroral radio emission also means that we may have a new way of detecting exoplanets, including the elusive rogue ones not orbiting a parent star.”
Kao added, “We think these mechanisms can work not only in brown dwarfs, but also in both gas giant and terrestrial planets.”
– Story by Ashley Strickland, CNN – Click here to see more on this story
*WeatherWatch.co.nz is a CNN affiliate