Home > News > Stormy Tuesday for some...

Stormy Tuesday for some 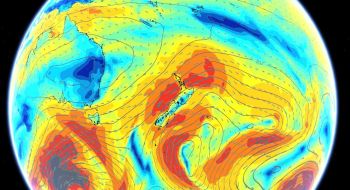 It’s the top and bottom of the country which will be most exposed to stormy weather conditions today say WeatherWatch.co.nz forecasters.

As the 2011 Spring westerlies finally kick in across New Zealand it’s the top and bottom regions that will be most exposed to the winds.

An anticyclone spreading east from Queensland will be too far north to place New Zealand under a protective layer of high air pressure and instead will place us smack-bang in the main windy zone.

Between a deep low south east of Dunedin and this big high north west of Cape Reinga the strong squash zone of west to south west winds will continue to blast some areas, especially today but possibly again later in the week.

Most exposed in the North Island will again be Auckland and surrounding regions such as Waikato, Northland, Coromandel Peninsula and Bay of Plenty.

In the deep south it will be coastal Otago and Southland receiving the strongest winds – and much colder too with those winds tending more southerly.  Snow is predicted to a few hundred metres, but isn’t expected to cause many issues.  Farmers are advised that windchills could be extreme enough to cause problems for new born lambs but slightly warmer winds are predicted as early as Wednesday.

While some areas will have lulls in the wind WeatherWatch.co.nz says that this is the start of 8 to 10 weeks of typically windy weather around New Zealand.