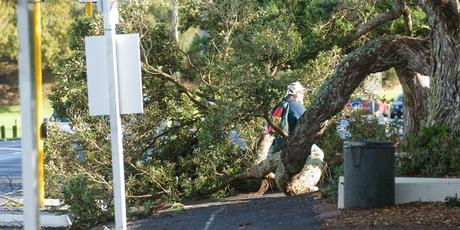 Emergency services were “rushed off their feet” as storms hit the upper North Island yesterday.

Police reported a six car nose-to-tail smash on Auckland’s Southern Motorway near Ellerslie and a flurry of more minor incidents causing delays around the city.

Strong winds in Silverdale toppled a carport and ripped tiles off roofs.

Auckland fire communications centre manager Colin Underdown said: “We were rushed off our feet with a sudden rush of incidents, but that subsided as the weather returned to normal.”

Heavy rain and thunderstorms were expected to sweep over the North Island and upper South Island last night and today with up to 100mm of rain expected in Mt Taranaki, Bay of Plenty, and north of Gisborne.