Home > News > Storms/Cyclones: How often do they hit u...

Storms/Cyclones: How often do they hit us? 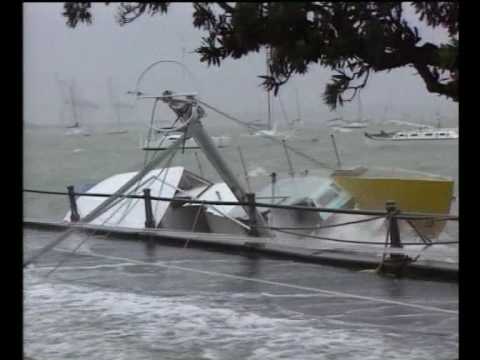 There are numerous cyclone enthusiasts in New Zealand but cyclones have been shying away from our shores over recent times but let’s take a look at the big picture.

Recent  research shows that northern New Zealand is hit by an average of a little over one storm of tropical origin each year. The severity of these storms depends on their location and on the phase of the El Niño/La Niña cycle.

Every year between December and April, storms from the tropics move south toward New Zealand. As these tropical cyclones advance poleward, they eventually lose characteristic hurricane features such as the eye and the surrounding symmetric cloud and precipitation region and progressively acquire the asymmetric cloud and thermal features more typical of a frontal mid-latitude storm. Scientists use the term extratropical transition (ET) to refer to this poleward movement and accompanying structure changes.

Several memorable ET events have occurred in the New Zealand region. In April 1968, Tropical Cyclone Gisele re-intensified as it moved south over New Zealand, producing winds gusting to 75 m/s (270 kph) in Wellington, and sinking the interisland ferry Wahine with the loss of 51 lives. Cyclone Bola dumped over 900 mm of rain and produced hurricane-force winds in regions of northern New Zealand in March 1988. Cyclones Fergus and Drena brought torrential rain and storm-force winds to the North Island in December 1996, triggering an exodus of summer tourists from coastal resorts.

In recent years cyclones have been noted by their absence however this summer could they be set to return?

Image of boat being washed up during Drena in Auckland

Love a good cyclone, great for the surfing….I have definitely noticed a drop off in the last five years.

Cyclones are welcome to stay away from our shores. No use worrying about them for next summer either 🙂 Winter and spring to get through first.