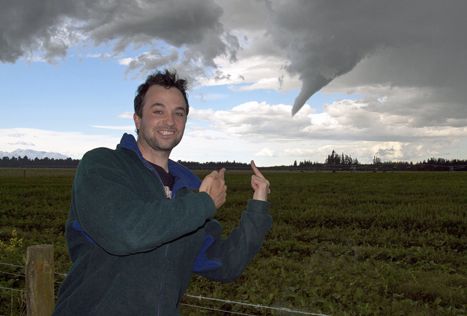 When Aaron Wilkinson decided to move to Mt Somers this year, it was not just the affordable real estate prices, nor the manageable 70-minute drive to Christchurch that was the attraction.

The 27-year-old stormchaser and weather forecaster had his eye on the sky when he made the move.

“There’s something about Canterbury thunderstorms, they tend to form in some areas slightly more often than others, and Mt Peel and Mt Somers – they tend to brew in that area.”

Wilkinson was reasonably familiar with the area from childhood trips to visit his grandfather in Cave, and then Geraldine. So, he looked around Mt Peel, then looked at Mt Somers.

“I knew it was there, but hadn’t really looked at it that closely, so I took a bit of a closer look and there were a few places for sale.”

He bought an old weatherboard home on 2030sq m of land, and has been renovating that. And while he would rather not mention the price he paid, the sums were simple. “There’s no way in hell I’d get that in Christchurch.”

Wilkinson has been following the weather since he was a teenager in high school in Christchurch. Roping in schoolfriend Stephen Burrows to do the driving, the pair started chasing storms.

“He got into it because of that. He still lives in the city, but he’s been chasing them in the US and in Darwin.”

Wilkinson’s interest was noticed by Tony Trewinnard, the founder of Blue Skies Weather, and he offered him a job straight out of high school.

He worked for Blue Skies for four years, before moving on to try something different; a year working at the Canterbury Museum as a collections technician. It was very different work.

“Thousands of boxes of old bird bones, sitting in the basement, sorting through those for weeks at a time.”

He still kept an eye on the weather, but after the high pressure of forecasting for a small operation, did not have to worry about it too much.

His career path swerved into The Warehouse, for two years as a nightfill staff member.

“It sounds like a step down, but I enjoyed it; staying up late, getting to sleep in.”

But the weather was not going to leave Wilkinson alone. A series of connections saw him offered the chance to fill in for three months for WeatherWatch.co.nz, and while he initially was not keen to leap back into the high pressure world of forecasting, he decided to take it on.

“And it was OK, I did three hours a day, and did that before I went to The Warehouse in the evenings. I liked it, it wasn’t so stressful, so I picked up my enthusiasm again for forecasting.”

Forecasting for WeatherWatch.co.nz has become Wilkinson’s main source of income; stormchasing is the hobby that sits comfortably alongside it. Technology means he can do his job from Mt Somers; he travels into Christchurch perhaps once a week, or so.

Ashburton is just 20 minutes away, so he says it is not like he is completely in the wop-wops.

Wilkinson’s aware it is a somewhat unusual transition for someone of his age; to move from Christchurch to a small rural settlement. But he says while he is interested in seeing new places, he is happy to live in New Zealand.

“A know a lot of young people move to Oz, but I’m quite a passionate New Zealander.”

His stormchasing hobby sees him gather up information such as lists of tornadoes in New Zealand since the early 1900s – there was a big twister around 1919-20 – and a collection of memories and photographs of particular weather events over the years.

“I can remember the 1992 snowstorm, and in 2002, a tornado that dropped into Tai Tapu, just south of Christchurch.

“There was big hail that day, and lightning, and I saw the tornado on the news that evening and thought, ‘that looks pretty cool!'”

He tracked down the person who filmed the tornado, West Melton’s John Gaul, a member of the New Zealand Thunderstorm Society, and inspiration to Wilkinson as one of the first people in New Zealand to chase storms.

To learn more about the weather, and how to see the storms coming, the schoolboy Wilkinson started teaching himself forecasting.

“When I started, it all sounded like gobbledegook, but eventually it started making sense.”

Now, his day starts about 6am, checking that the forecasts he prepared the evening before are still accurate, and he will be checking his information every two hours during the day, making sure it is still accurate and updating when he needs to. From about 3.30pm on, he will put together a major update for the centres using WeatherWatch’s services. He writes a national forecast each day, and a forecast for Sky TV’s Country TV channel.

In between, he is looking for storms and tornadoes. Tornadoes are a bonus, but not all that frequent, but Wilkinson says he is likely to get just as excited over a good thunder and lightning display. He will travel – the West Coast can offer some spectacular storm-chasing experiences, but generally they come with torrential rain.

“Whereas in Canterbury, you can just sit on the outside of a storm.”

Wilkinson says he has likened storm chasing to fishing; first you sit and think about what bait to use, and how to catch it – that’s the forecasting.

“Then you’re out there chasing it, putting your rod in the water … and then you catch the big fish and tell all you mates about it! It’s just a bit of fun really.”

Why are we so interested in the weather, and whether it is going to snow or not?

“I guess in places like Alaska or Canada, where they probably get snow every winter, because they get it all the time it’s not as interesting I guess. Whereas here,the weather tends to tease us.”

Trying to forecast snow for places such as Christchurch and Timaru over the past week proved difficult.

“It was fluctuating so much, every six hours, it would be looking like minus 8, then minus 6, and it doesn’t usually change that much.

“That’s why it was a real pain, trying to nut out whether it was going to go to sea level or not. In Christchurch the other night, that heavy rain, it was probably to within 1.5 degrees of starting the process [of snow]. But it just didn’t get cold enough.

“In Christchurch, because of all the snow talk, they were going berserk. I almost thought there were going to be riots if it didn’t come.”

To see some of Wilkinson’s weather photographs, go to www.stormchasers.co.nz

That’s a nice story, good on ya Aaron. You’d love a good Wellington tstorm, low wall cloud, sometimes meso system which I dislike. Tstorms fairly rare in Wgtn but the sheer noise can shake houses. Jan storm was deafening, like an earthquake shaking the place. You’d be in your element.